The Enactus Warwick Intelligence unit has rounded of the year by releasing its Independent Retail Outlook for Leamington Spa 2015.

The Intelligence Unit, which is a new venture launched this year, is tasked with identifying local problems and opportunities within the local community. In this report, which focuses on the neighboring town of Leamington Spa, the team survey independent businesses and students from within the University to assess how each can mutually benefit from the other. 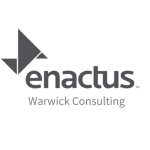 We are incredibly excited to say that the partnership with EY will continue and expand for next year! More details to follow soon....

Enactus Warwick closed the doors behind another very successful year. We have grown stronger and larger year-on-year over the past five years enabling us to inspire more students and impact...